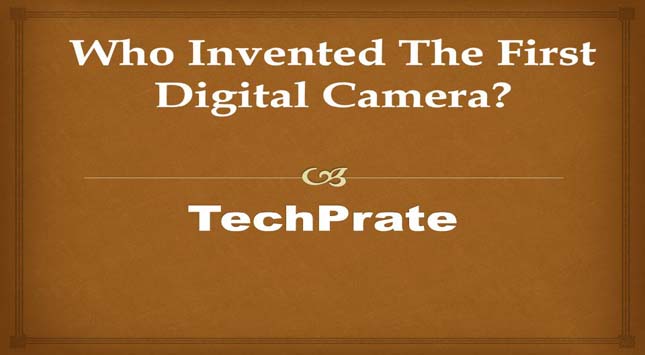 In 1957, people used a drum scanner to take digital photos. The drum scanner was more prominent in size, and its weight was hefty.

It wasn’t easy to capture images because people didn’t want to carry weight every time. Plus, the results were not that good.

At Tech Prate, we will deliver complete information. This history will start from 1975 and end in 2021. So be ready because we are going to reveal some exceptional characteristics.

The first digital camera was released in 1975, and that was the first video camera ever on the planet. The cameras released earlier had only picture options, but this camera had video options.

There was no concept of floppy disks or hard disks. People used cassettes to record the videos, and the duration of each video was about 30 seconds. Thirty seconds record time sounds wretched, but that was in 1975. When people heard about video recording, they were surprised even after watching the video for just 30 seconds.

The camera was enormous, so it wasn’t easy to carry because of its heavyweight. There were 2 buttons, one on the left and 2nd on the right. With the first button, the camera was turned on, and whenever a person wanted to record any video, he pressed the right button to start recording. The capture time was only 30 seconds, plus the resolution was lower, so it sounds poor? Well, let’s dig deep.

Sony also released a camera in 1975, and its look was eye-catchy. People preferred to have a Sony camera instead of Kodak, but what happened after that?

Another Competitor Came into The Market

When Sony and Kodak were working hard to improve the display of their cameras, another competitor came into the market, whose name was Mega Vision Tessera. This camera shocked the entire world because it had some outstanding features. Mega Vision released a camera whose resolution was 4 MP (2000×2000). In just 11 years, people saw a high-quality resolution, and that happened in 1986.

Every competitor was shocked because they had never seen such a change in 11 years. Several people used Mega Vision Tessera because it was small in size, and it was not that heavy as other cameras were. It had another superb option, and that was its connection with the computer.

In those days, no one was familiar with USB devices as people are now. So connecting a camera with a computer and editing the videos was easy for directors and video editors.

So that’s all of the 1980s. In these years, the camera’s weight was decreased, but the cameras were expensive. In the 1980s, Mega Vision caught every person’s attention, and now let’s dig deep.

After 15 years of continuous struggle, no one could get out of the rat race because every 2nd company started manufacturing the cameras. But something interesting happened in the 1990s, and that was the computer and camera combination.

In 1990, the US made the first digital camera that was small in size. However, its picture quality was outstanding, and it could store 32 pictures. Its best feature was its connection with the computer. Its manufacturers added a port. That port gave a direct link to the computer in less than no time.

If your space ends, you can use the cable to connect it with the computer. After that, you can save those pictures on your computer and delete them from your camera. In this way, you were able to get ample storage space in less than no time.

Finally, a century ended, and now it was 2000. In these years, modern technology arrived so fast. Digital cameras, laptops, smartphones arrived so fast, and everyone had the latest features.

In those days, Sony released a camera that had multiple features.

In this decade, Sony released the concept of 144p and 240p video quality. As a result, their camera performed a lot in the market, cheaper than others.

Another good thing about that camera was its high storage space. Sony gave 156 MB to store pictures in it, and in those days, 156 MB was a goldmine. That camera performed well in the whole decade, but after 2010, several companies made digital cameras, and now the real competition started.

Who is The Winner?

Now several manufacturers have made digital cameras. There was a time when 240p was considered an outstanding result, but now people don’t even care about 4K quality because 8K quality has arrived.

DSLRs Have Won The Competition

In my opinion, when we see Digital Cameras, DSLRs have performed well in the market. You know how eye-catchy the result of a DSLR camera is.

It has a high-quality lens and enough storage space. You can insert a memory card externally and take thousands of pictures.

In smartphones, the 1080p result is not a problem. Several apps have arrived in the market that improve the image quality. B-16, Retrica, and Prisma are the best examples. You can download these apps from A TO Z APK. It is the best website that uploads android apps.

Now, what is your opinion? In my opinion, DSLRs have dominated the market, but iPhones have also competed with the DSLRs. Undoubtedly, iPhone is a smartphone, but its camera quality competes with the DSLRs.