The Outlook of the Quantum Computing Market 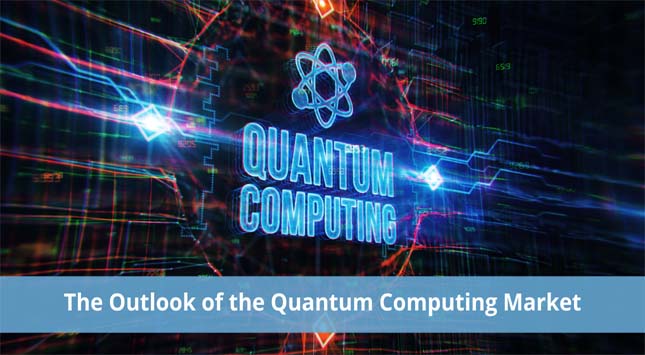 Quantum computing is considered a promising, disciplinary, and emerging branch of study in today’s world. It is based on quantum mechanics, being adopted to develop advanced computers that can solve complex problems within minutes.

The Outlook of the Industry

Quantum computing offers significant opportunities and advantages, but the road to its growth is full of obstacles. Various companies like IBM, Google, Alibaba, Honeywell, IonQ, and Xanadu are leveraging the benefits of quantum computing.

The quantum computing industry is forecast to witness healthy growth in the coming years because of increasing cybercrimes and the growing demand for advanced technologies for scientific discoveries.

In addition, increasing government initiatives in various countries are forecast to benefit the industry. The increasing demand for quantum computing across various verticals, such as finance, chemical, pharmaceuticals, and medical, is forecast to contribute to the industry growth.

Of all the regions, North America holds the largest share in the industry because of the increasing penetration of advanced technologies. In addition, companies are increasing their R&D activities considering the future potential of the technology.

According to Astute Analytica, the global quantum computing market is forecast to grow at a compound annual growth rate (CAGR) of 25% during the forecast period from 2020 to 2025.

It would take a couple of decades to reach the era when the true powers of quantum computing will be unveiled. Quantum computers offer 100 million times faster performance than traditional computers.

Moreover, it will help people learn biology and evolution. It will assist medical practitioners in treatments, such as curing cancer. In addition, it will help the pharmaceutical industry in drug formulation.

Microsoft and KPMG also made headlines as they will put quantum algorithms to solve real-world problems. The companies will test Azure Quantum’s capabilities, which will give an edge to the growing era of quantum computing.

The advent of quantum computing has initiated a race among the tech giants. Rigetti unveiled its Quantum Computing Cloud Services in 2018.

Advantages and Applications Shaping the Future of Quantum Computing

The advancements in computers and algorithms will help tackle challenges faced by the users of classic computers.

The primary advantage of quantum computing is that computers can perform complex algorithm calculations with ease and efficiency. Moreover, computing qubits can exponentially speed up the process and consume less power.

Quantum computers are expected to offer significant benefits in the medical field. These computers will help detect the disease and discover medicinal formulas with efficiency.

Moreover, they will be able to analyze the medical image, which will ultimately reduce the diagnosis cost. The introduction of quantum computing in healthcare will result in better patient experiences at considerably low prices.

Quantum computing is forecast to eliminate the problems linked to data quality and analysis accuracy.

Another promising application of quantum computing is in the field of computational chemistry. Quantum computers can focus on both 1 and 0 simultaneously, which can offer immense power to the machine to track the molecule.

Thus, quantum computers can perform the nitrogen-fixation process to develop ammonia-based fertilizer. In addition, it will also help in building a room-temperature superconductor. The potential applications of quantum computing will help introduce efficient methods to reduce carbon dioxide for a better climate.

Traditional computers take a significant amount of time to analyze weather conditions. Quantum computing is forecast to make a change here. The ability of quantum computers to process massive data within minutes will benefit the overall industry.

Quantum computing is a promising technology having significant potential if built on a large scale. The primary challenges are verification, fabrication, and architecture. Quantum Computers can easily store complex data in a single bit.

That’s why quantum computers are difficult to build. Apart from that, there are significant disadvantages of quantum computing that need to be considered.

Every computation demands a new algorithm. Quantum computers also require special algorithms to complete the task. Thus, it is another significant challenge.

The Demand for Low Temperature

The temperature has been a key issue in the processing of these computers. Quantum computers need a cold environment, around negative 460 degrees F. Thus, it becomes difficult for companies to maintain such low temperatures.

Quantum computing is expected to boost security. However, various predictions state that it can be a significant threat to privacy.