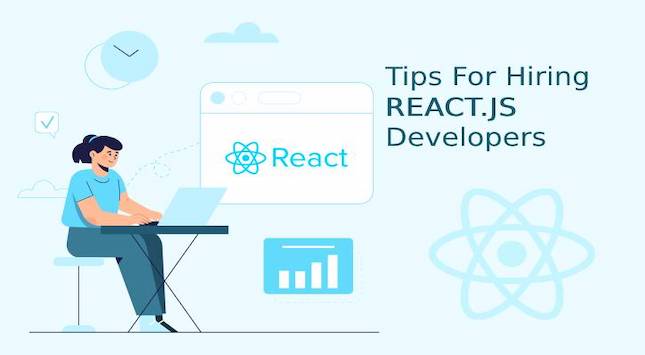 React js is one of the in-trend JavaScript libraries for developing front-end applications. Facebook created it to solve the problems regarding the scaling of apps. If you want to build scalable React applications, hire React developers today.

React is a declarative, efficient, and flexible JavaScript library that helps you build large-scale applications with data that changes over time. It’s pretty different from Angular or Vue, which are imperative.

The library has gained popularity because of its ease of use and wide features. Developers can create complex user interfaces that are interactive and fast without much effort on their part. React developers are in high demand these days due to the growing popularity of the library.

The hiring process is a rigorous one, and it’s important to take your time in order to find the right candidate. To help you avoid time-consuming backtracking, we’ve put together a list of the top six things to watch out for while hiring React developers.

Following are the technical skills your React developers should have:

A desirable Reactjs candidate should have practical knowledge of important concepts of React, such as JSX, React hooks, virtual DOM, component lifecycle methods, and class & function components. At the time of the interview, ask a developer whether they are acquainted with these concepts or not.

Testing is a vital part of the software development process. It helps developers to ensure that the code they write is working correctly and will not cause any errors in production. There are many testing tools available for react developers to use. The most popular ones are Jest and Enzyme.

React developers are expected to have advanced knowledge of JavaScript and its related technologies to be able to optimise the app and make it more efficient for the end-user with the least bugs in it.

#2 Must Know How to Use ECMA Script

ECMA Script is used by ReactJS developers to build web applications. This programming language is the backbone of ReactJS, and it helps developers to create interactive and fast web apps. Developers should use this language because it will make their work easier and faster.

The benefits of using ECMA Script are:

Version control systems are a must for any software developer because it is an essential part of the software development process. It is not just about the code but also about the files and folders that are used to develop a website or application. It allows for tracking changes, reverting to previous versions if necessary, and provides a central repository for all versions of a project – both current and past.

This will allow developers to have more control over the changes they make in their code and also give them peace of mind if they need to go back to a previous version of their code in case something goes wrong.

#4 Should Have Ability to Manage React.js Project with Sprint Planning

A sprint is a time-boxed development cycle that has the goal of delivering working software at the end of the cycle. This project management technique is very helpful to react developers since it helps them to plan their work by breaking it down into small tasks that are easy to manage.

It also helps them to estimate the amount of time they will need for each task and whether they will be able to complete it on time or not. This way, they can avoid being overwhelmed by too much work and can ensure that they finish everything on time. An ideal React developer should be acquainted with this project management technique.

A styling guide is a document that is used to provide a set of rules and conventions for the design of an interface. It helps designers, developers, and stakeholders to create a common understanding of the project’s visual language.

It is created to better communicate with each other when designing interfaces. They also make it easier for developers to build components without needing to spend time consulting with designers on every single detail of how they should be styled. This prevents developers from making mistakes that can be costly and time-consuming later on down the line. A react developer’s role is not just limited to coding. It also includes understanding the fundamentals of styling and how they work with React.

Many people think that they can just hire a React Developer who has all the technical skills, but that’s not true. The developer needs to have the right personality for their clients and team members; otherwise, it won’t work out well.

The most important thing for a React Developer is to be able to communicate effectively with clients and other team members. The skillset of a React Developer will be needed in every company, but interpersonal skills are what make the difference.

An ideal react developer should have interpersonal skills because they will have to interact with many people on a daily basis. They will need to collaborate with other developers, designers, and project managers.

They will also need to work closely with the product owners and the clients. They will be required to communicate effectively through emails, phone calls, meetings, and so on.

EnProwess is a global outsourcing company having a goal to enable SMEs to expand their reach and increase their market share. For more information, kindly visit our website.

Chirayu Joshi is the CEO of EnProwess – an emerging custom software development company that offers mobile development, web app development, dedicated developers, and software testing service at a competitive price. His bold leadership and foresight have taken the company to great heights. He loves to read and share his insights on the tech industry.

OneDrive vs Google Drive: Can You Make the Right Choice?