What Exactly is a Dating App? And Current Dating App Statistic 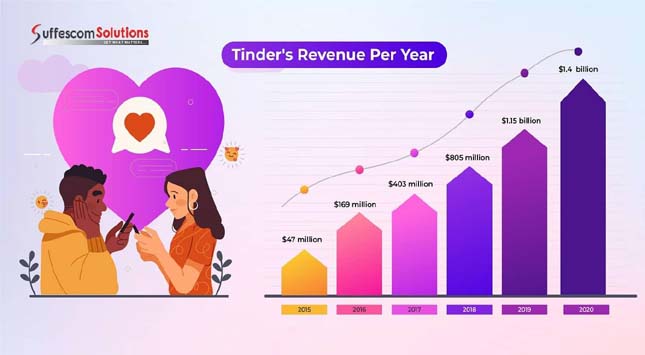 A dating app is a mobile platform that brings individuals together who share common interests, such as romance, casual sex, or friendship.

Users can usually browse images and communicate with one another via chats and video calls using the software.

There were dating websites in the beginning. Kiss.com debuted in 1994, followed by Match.com in 1995. It was a revolution after the period of mail-order brides.

Before the first website, women had to register with a specific agency, and men had to choose from a catalogue sent to them by mail. Isn’t that starting to sound a little dated now?

According to Statista, about 196 million individuals use various online dating services around the world today, with an estimated growth of 80 million by 2024. As a result, if you’ve been considering developing a dating app, now is the moment.

As previously stated, current technology has dramatically transformed the way we find partners, and internet dating is no longer frowned upon.

Let’s Take a Look at Some Numbers:

Let’s have a look at how to develop a dating app similar to Tinder.

What are Tinder’s Main Features?

Tinder, as previously stated, is one of the most popular dating apps in the world, and its secret weapon is its gaming spirit and swiping feature. You swipe right if you like someone’s profile and left if you don’t.

Login with Your Social Media Accounts

Geolocation. Tinder uses a user’s location to determine which social venues, such as pubs and coffee shops, they frequent the most. Other users who have visited that location will only receive a notification once the app user has left.

Tinder also uses geolocation to locate mates based on shared interests. As a result, the app’s services enhance. For example, if a large number of app users continually eliminating cinema halls from their lists, the app will remove them from the social locations list.

Algorithm for matching. The app algorithm compares the new user profile to existing profiles in the database and suggests appropriate matches.

The Tinder Algorithm in Action

Luce Ventech is the Source of This Tinder Swipe

Look for a match. Users can search by interests, age, gender, and other factors. The programme then creates a match between users who enjoy each other’s profiles.

Configure your profile. Tinder users can customise their profiles to make them more reliable and appealing.

How to Develop a Tinder-like App Configure Your Profile

Notification through push. The user receives a push notification when the app algorithm discovers a good match.

Chat in private. Users can chat in the app’s built-in spontaneous messaging when the app finds a match.

The following stage is to learn how to create a dating app.

Tinder is revamping its app to emphasise its social, interactive features with the introduction of “Explore,” a new section that will include events such as the return of the popular “Swipe Night” series, as well as ways to find matches based on shared interests and engage in quick chats before a match is made.

When taken together, the modifications help Tinder move away from its roots as a speedy match-based dating app and toward something more akin to a social network that helps users meet new people.

This move may appeal to a younger population that believes traditional online dating has lost its novelty. Today, these users are flocking to dating apps that advertise themselves as locations to meet new people, while newcomers to the dating app sector are experimenting with different ways of connecting users, such as brief, TikTok-style videos, as in Snack, or even audio, as in SwoonMe.

These industry trends may have posed an existential danger to Tinder’s own business. Instead, the firm has emphasised interactivity as a key component of the Tinder experience and a way to preserve its dominance.

Tinder Explore will incorporate a few existing features as well as a new way to meet people when it launches. Users can connect with others who share their hobbies, such as Foodies, Gamers, Music Lovers, Social Causes, Entrepreneurs, and others.

More hobbies will be introduced over time, allowing Tinder users to match with people based on their interests rather than their appearance.