Reasons Why 5G Base Stations are Growing Worldwide 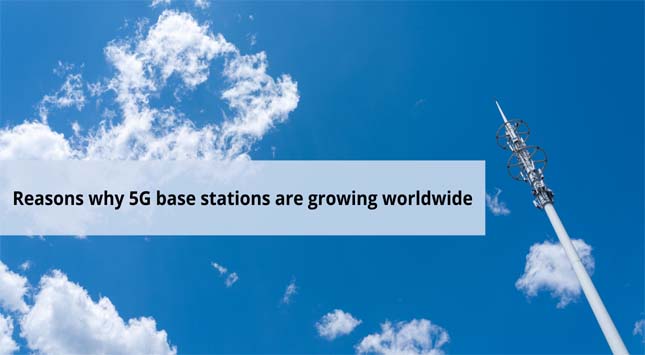 The race of 5g has forced various countries to adopt the changes and strengthen their networking system.

Moreover, the COVID-19 pandemic has further changed the outlook of digitalization. The Internet has become a major necessity for the majority of the population.

Statista estimates that around 4.66 billion active internet users have been registered in January 2021 worldwide. This data accounts for 59.5 percent of the global population.

In this growing 5g race, countries are rapidly adapting to 5G technology. Apart from that, communication service providers are battling to outgrow competitors. 5G is expected to benefit the companies in all segments, be it agriculture, healthcare, or automotive.

The growth of 5G will create opportunities for the healthcare and agricultural sector to enhance their services.

Deployment of 5G in Various Countries

5G deployment began in 2019 to offer enhanced broadband for the devices. Moreover, the 5G network is considered 100 times faster than 4G. South Korea rolled out 5G deployment in over 85 cities in January 2020. China holds the second position as the country records maximum deployment of the 5G network.

Japan also launched 5G mobile service in 2020. India is also planning to introduce 5G services in the country. Jio announced plans in 2020 to launch a 5G network by late 2021. Moreover, the Indian government anticipates the launch of 5G services in the first half of 2022. Reliance Jio, Bharti Airtel, and Vodafone Idea were granted this authorization by the Department of Telecommunications (DoT).

How Do 5G Base Stations Work?

5G requires small cell base stations assembled with the equipment to transmit and receive data from the connected devices. A 5G base station is built to develop a central connecting point for wireless IoT devices. In addition, the antenna components address various technical and natural challenges, including aesthetics, weather, and security requirements.

The Potential Scope of 5G Base Stations

The Internet has become a necessity for our daily lives. With the rise in the number of internet users, it is legit to consider that the demand for the 5G rollout is soon to offer favorable opportunities.

Moreover, 5G base station providers will witness notable growth as a result of the growing demand for efficient networks and speedy connectivity.

According to Astute Analytica, the global 5G base station market is forecast to grow at a compound annual growth rate(CAGR) of 60% during the forecast period from 2021 to 2027.

The evolution of the Internet of Things (IoT) and the technical barriers due to critical communication services will benefit the global 5G base station industry.

In addition, the development of the 5G IoT ecosystem for communication services acts as a key factor influencing the global 5G base station market’s growth.

The healthcare sector has been employing digital technologies to provide efficient services. Moreover, the advent of e-healthcare, smart cities, and smart homes will benefit the market players in the future.

Which Country will Outgrow in the 5G Race?

China has been making headlines due to growing innovations and the development of 5G technology. Moreover, China accounts for 70 percent of the world’s 5G base stations.

Statista estimates that the number of 5G connections is forecast to reach 10 million in North America by 2025. Moreover, the same sources estimate that China and the United States are rolling out 5G infrastructure rapidly. Thus, it will benefit the population in the country.

In terms of the number of base stations, China has registered more base stations as compared to the United States. The country registered the deployment of around 690,000 stations by the end of 2020. In addition, Chinese telecom carriers are forecast to build around 1 million new 5G base stations in 2021.

Europe and North America are forecast to lead in the global 5G base station industry, mainly due to the well-established networking infrastructure in the regions.

The Growing Establishment of Base Stations

With the growing deployment of the 5G network, demand for 5G base stations is also increasing. Global System for Mobile Communication (GSMA) estimates that 5G networks would be utilized by one-third of the world’s population by 2025.

China Mobile, China Unicom, and China Telecom, the three major Chinese mobile network carriers, had deployed more than 250,000 5G base stations in China by 2020. In addition, the numbers are forecast to grow to 600,000, with network coverage in China’s various cities.

Furthermore, 5G networks and all-optical networks will provide Huawei with economic prospects. According to the GSM Association, by 2025, China will have more than a quarter of all cellular devices connected to 5G networks, accounting for one-third of all global 5G connections.

Samsung has experienced a jump in demand for its base station equipment after the successful 5G commercialization in Korea. In addition to partnering with the United States operators such as AT&T, Sprint, and Verizon, the company has offered base stations to Korea’s three major mobile network operators, including SKT, KT, and LG Uplus. Nokia (NOKIA.HE) and YADRO plan to form a joint venture to manufacture 4G and 5G telecom base stations in Russia.

Emma is a freelance writer and content strategist who offers to ghostwrite, blogging and copywriting services. She has a keen interest in content marketing with a hold on social media management and market research. Pitch her out to discuss interesting and niche IT domains that are blooming in integration with modern technologies.