Factors Shaping the Future of the Mini-LED Display Industry 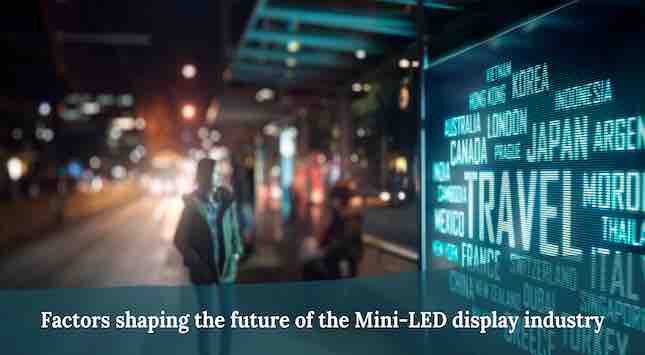 LEDs are used beneath an LCD substrate layer in a conventional LCD, as seen on the latest Macs and most of Apple’s iPads. This glass layer can either block or let light from the LEDs pass.

They are Assembled into Considerably Smaller Dimmable Blocks

Technology is rapidly evolving, with new breakthroughs gaining consumer interest on a regular basis. One of the most notable advancements is mini LEDs (light-emitting diodes) in display units such as televisions and smartphones. They’re also utilized in the manufacturing of a number of smart devices, including computers, smartwatches, and so on.

Prominent companies are adopting Mini-LEDs, which may shape the future of the industry in the coming years. Recognizing the future potential of the Mini-LEDs, Apple is considering using this new display technology in its iPads and MacBooks. Apple’s involvement in mini-LED could be a significant growth opportunity for the industry as it will influence other players to adopt the same.

The Contribution of the Automotive Segment

The automotive segment is significantly deciding the future of the Mini-LED industry as it is one of the end-use industries. Mini-LED screens are likely to grow in popularity in the coming years, especially for automobile applications.

Some LED manufacturers have also shown off concept applications of tiny LED technology for external automobile illumination. Furthermore, increasing investment in mini LED display technologies in Asia-Pacific is forecast to give high prospects for the mini LED display industry.

Additionally, China accounts for the highest share in the global automotive market. Thus, the growth of the automotive industry will offer several growth opportunities for the Mini-LED display industry.

LCD technology is the current leader in in-vehicle display due to its technological and cost advantages. OLED outperforms them all in terms of transparency, flexibility, and allotypic property, yet difficulties like burn-in and longevity remain unresolved despite years of development.

Mini LED offers significant advantages, such as lower cost and higher reliability than traditional technology like OLED. Furthermore, OLEDs have a short life span and can be damaged through UV lighting.

Suitable for Smart Devices and Wearables

The conventional LED chip are generally adopted for display backlight modules. The applications of mini-LED are applied to backlight applications, like HDR and flexible displays. The demand for smart technologies and wearables is forecast to increase in the coming years due to its health and other benefits. Thus, all of these factors will contribute to the growth of the Mini-LED display industry.

Miniaturized LED chips inherit the advantages of high efficiency and long life cycle of traditional LED chips. In addition, the benefit of size is another considerable factor determining the future scope of the industry.

Another considerable factor is the cheap cost of mini LEDs. The cost of the OLED panel is directly proportional to its size. However, OLED displays cost more than mini LEDs. Thus electronic manufacturers are adopting mini LEDs to boost profit without compromising the product quality.

Mini-LEDs are smaller than regular LEDs used in LCD screens, as the name implies. They are about one-fifth the size of ordinary LEDs, measuring 0.2 millimeters or less. As a result, producers are able to squeeze a lot more of them into a single display. Over 10,000 LEDs cover the whole back of the 12.9-inch iPad Pro display.

Leading manufacturers such as Lextar and EPISTAR Corporation have also started selling mini LED backlight products for gaming notebooks and monitors. Such advancements are potentially boosting the growth prospects of the industry.

Astute Analytica estimates that the global Mini-LED display market is forecast to grow at a compound annual growth rate (CAGR) of 78.3% during the forecast period from 2021 to 2027. The growth of the market is attributed to the above-mentioned factors.

The global mini-LEDs market is forecast to witness favorable opportunities in the coming years due to the wide applications of the technology and its benefits. Furthermore, growing advancements in consumer electronics and the automotive segment are forecast to benefit the market in the future.

Electronic manufacturers are rapidly adopting these products to increase profit due to continuous advancements. The demand will further grow in the coming years.

Emma is a freelance writer and content strategist who offers to ghostwrite, blogging, and copywriting services. She has a keen interest in content marketing with a hold on social media management and market research. Pitch her out to discuss interesting and niche IT domains that are blooming in integration with modern technologies.