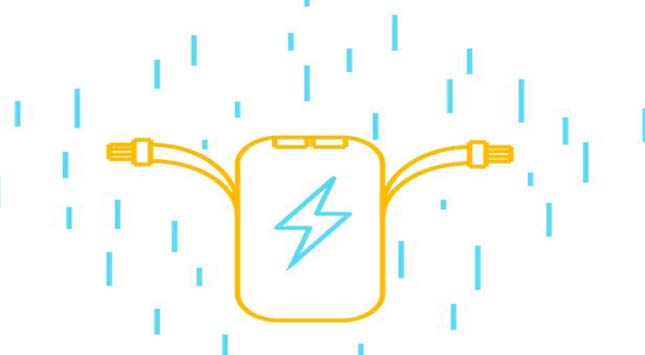 There are a lot of power banks on the market today and we have a lot of bloggers that always blog about what the Best Power Bank is with their high capacity and they always focus on the basics of what a portable charger has to offer. I’m not saying that all power banks are the same, but most of them have the same characteristics and to call one better than the other is something that can’t be blatantly described.

With that said, there are plenty of power banks out there that are becoming innovative with what they offer and as a result, that makes them more useful to use. These power banks are the ones that take a different turn and offer value in other ways that more usual power banks don’t.

Slims power banks are among the most useful kinds of portable chargers. However, if all they can provide is slimness, that’s good but it’s nothing new that other slim power banks can’t offer.

In this case, though, the Anker PowerCore 5000 Slim power bank goes further than just being slim. It has a form factor that is able to make using it a great experience.

What’s so special about using the Anker PowerCore 5000 Slim?

Also, on charging side design side, the power bank is very easy to use. With all of its functional parts being on a single side; like the power button, charging port, Micro-USB Input and 3 LED power capacity indicators lights. Using a short charging cable with the PowerCore Slim 5000 is what makes using this power bank a better experience because there’s less of a hassle of taking care of a cable.

Most small power banks that are cylindrical are very normal. When I say “Normal” I mean that most of them just have a single USB charging port and the charging speed is usually just 5V/1.0A, which is usually a slow charging speed. That’s not the case here because Aukey power bank that is very small takes a turn to USB-C charging.

What is USB-C charging?

USB-C charging is a new type of charging that is overall faster than standard charging and is on par with Qualcomm Quick Charge speeds of charging. Newer Android smartphone are beginning to use these kinds of charging methods because they’re able to recharge faster, and one the latest smartphones to use it is the Google Pixel. Even the newer MacBook models are using USB-C to charge and sync to other devices.

What’s so Special about this Aukey Power Bank?

It’s made for those that own USB-C compatible smartphones! USB-C smartphones are not very common, at least not yet. However, this is a Mini power bank and it’s using the fast charging technology. A USB-C to USB-C charging cable is needed to charge devices with it and once that’s done, it’s able to deliver charging speeds of 5V/3.0A.

What makes this power banks more innovative than a lot of other ones is just how small it is and how it’s integrated so well into a charging cable. It just has a power capacity of 450mAh and that’s still enough power to give about 15% of power to an iPhone 6. So it’s really meant for those emergencies.

With that said, I realize that it’s not a long-lasting power bank and neither does it even offer fast charging because it has an Output charging speed of the only 5V/1.0A. It’s more of the form factor and the way that you can use the power bank. You don’t need to plug the charging cable into a Wall Adapter until the power bank piece is fully depleted of its power. So you can just connect the Jackery Jewel to a Lightning compatible device, press the power button and it’ll begin charging. Sure it looks odd that you’re charging your iPhone without a plugged in charging cable but that’s the whole point.

This RAVPower power bank has a design that not many people care to think about. All the functional parts on the power bank are so compact and well inputted into the power bank, which makes it very easy to carry and be portable with it.

So even though I said that most “Best Power Banks” are competing for the same High Power Capacity and Charging Speeds; this Anker PowerHouse goes beyond that stuff. Its name is actually quite fitting because even though you can’t exactly power a house, you can power quite a lot of things.

What the Power Capacity on this Monster?

The power capacity starts at a whopping 120,000mAh and that’s a lot of power. However, it’s important to remember that power capacities, especially like this PowerHouse goes through a conversion and that’s going to leave you with a few thousand less of power capacity than what the PowerHouse actually starts with. Although that doesn’t really matter too much.

That’s because whatever power capacity that you do end up receiving it going to end up providing lots of full charges to smartphones, tablets and even laptops. The PowerHouse will have no problem lasting for a month if all you’re using it for is to charge smartphones and maybe tablets.

Charging Options for Something with So Much Power?

There are plenty of charging options with the PowerHouse because it has 4 USB charging ports, an AC Outlet. a V12 Outlet and DC port that is used both as an Output and Input to recharge the power bank. So it’s very versatile not only with charging, but it can also power appliances like a Mini Fridge.

This is the perfect kind of the power bank (Do we even call it that?) to keep in your house in case of emergencies or if you want to take it out into the wilderness for when you go exploring.

With that said, there is indeed a charging port and a Micro-USB port that you can also use to charge devices and recharge the power bank. What other kinds of power banks have such awesomeness? Very few and possibly none at all. All you really need is a USB wall charger to recharge the power bank because the iWalk portable charger by itself already has lots of capabilities that make it a strong power bank to use.

5 Reasons To Replace Your Laptop With a Tablet